Pancreatitis is an inflammatory disease of the pancreas, with manifestations in the form of irreversible changes in the structure of the organ, which cause pain and a steady decline in its function.

There is a worldwide trend toward an increasing incidence of acute and chronic pancreatitis, more than doubling over the past 30 years.

What are the symptoms of chronic pancreatitis? 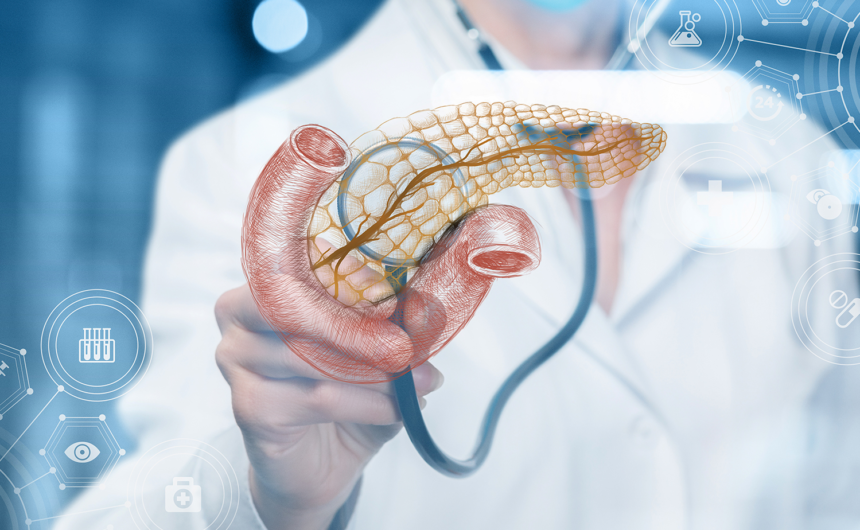 The most common symptom of pancreatitis is severe pain in the upper belly. This pain may go through the body and into the back. When the pancreas isn’t working correctly, the body can’t break food down properly, and so patients often report nausea and vomiting. The body realizes it can’t digest what you’re consuming, so it gets rid of whatever you put in. Some people also report diarrhea and oily stools.

In severe cases, pancreatitis attacks can lead to unintended weight loss and severe dehydration, made worse by the fact that you may not be able to drink water and get rehydrated without vomiting again. If you notice these symptoms, get to an emergency room as soon as possible for treatment.

Without proper care, chronic pancreatitis can lead to serious problems, such as severe pain and malnutrition. Over the long term, people with this condition are at risk for developing diabetes and pancreatic cancer.

Though rarely found in Thailand, patients with pancreatic cancer are increasing in number. According to World Health Organization reports, pancreatic cancer ranks seventh worldwide and fourth in the USA as the cause of cancer deaths.

Pancreatic cancer is classed as a severe condition because diagnosis is difficult and there are no definite symptoms in the early stage. The patient may complain to his or her doctor about stomach ache, flatulence, loss of appetite or jaundice. However, in many cases, there are no visible symptoms. Many times the condition is discovered through a routine physical check-up, which can be done by one of our specialists at Triborough GI. In this instance the doctor notices anomalies in blood tests and develops a further diagnosis by using a CT scan.

The cause of this disease is yet to be identified, but those who smoke, eat meat with high fat content and have a genetic predisposition are at risk of developing pancreatic cancer. Additionally, those who suffer from chronic pancreatitis and pancreatic cysts are also at risk.

As a rule, the first signs of pancreatitis in alcoholics begin with the onset of acute pain in the vivo, but they may extend to the back. They are also called shingles. These pains may occur suddenly, or they may be constant reminders. The patient gets worse after eating, especially fatty foods, smoking, or drinking alcohol.

Symptoms of alcoholic pancreatitis may include:

Gradually such consequences and complications of pancreatitis in alcoholics can develop:

In addition, swollen and enlarged pancreas compresses other organs, which also leads to pain.

If you are found to have chronic pancreatitis, it’s something you’ll have to manage for the rest of your life. The pancreas is permanently damaged, and it can’t heal itself. So you’ll have to take steps to reduce the stress placed on the pancreas. Two steps we urge our patients with this condition to take are to stop drinking alcohol and stop smoking cigarettes.

You’ll also likely need ongoing treatment to make up for your lowered pancreatic function. If the pancreas doesn’t create enough enzymes to help with digestion, your doctor can prescribe medications called pancreatic enzyme supplements. These medications, which you take with food, act almost like a replacement pancreas and help the body get the nutrients it needs from food. I’ve had patients with severe chronic pancreatitis who have seen dramatic improvements to the quality of their lives once they started taking this medication.

But if that’s not enough, we do have other options. Patients who have severe pain or uncontrolled diabetes or weight loss and who don’t see any improvement after enzyme-replacement therapy may benefit from surgical treatments, such as a pancreas transplant.

Chronic pancreatitis can have serious and long-lasting effects. But with lifestyle changes and effective treatments, patients with this condition can reduce their pain and live a more normal life.

Gastritis During Pregnancy: Causes, Foods to AvoidpreviousH. Pylori – The Silent (And Sometimes Deadly) Bacteria Inside Usnext